The game starts with all chess pieces except the King on each side mixed up and turned upside down, turning them into mystery pieces.

The King is placed in the normal place in the chess board, and all mystery pieces are placed at random on regular locations on the Chinese chess board. 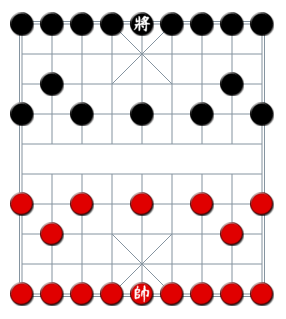 A regular chess piece (i.e. a king or any other chess piece that has been moved previously) moves normally according to the normal chess rule, see Chinese Chess basic rules. However, unlike regular chinese chess, the guards no longer must stay inside the palace, and the elephants no longer have to stay on their side of the river. Specifically:

Just like in regular Chinese chess, both sides take turn to move their pieces. The game ends when one checkmates or stalemates the other side, or both sides agree to draw the game. The game may also end according the regular Advanced Rules or the Automatic Drawing Rules.